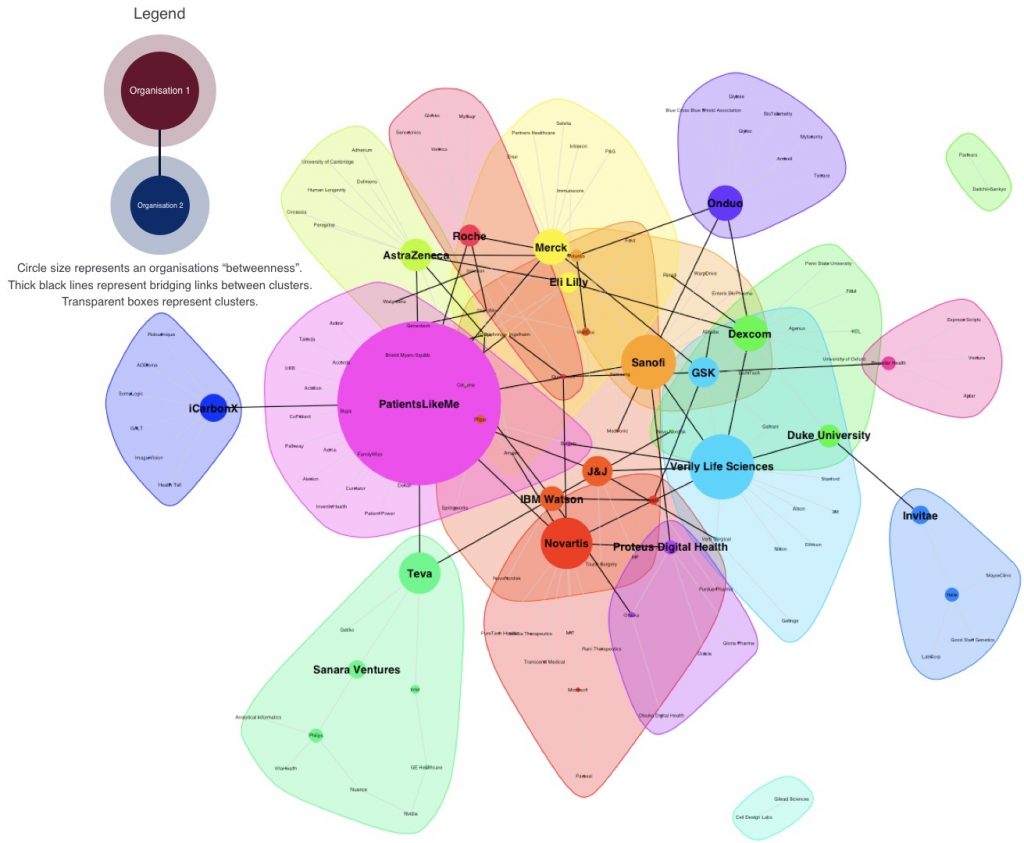 This blog uses social network analysis to investigate how the life sciences industry is evolving to harness the power of data.

What is social network analysis?

What are structural holes?

Structural Holes was a concept originally developed by Ron Burt, Professor of Sociology and Strategy at the University of Chicago, in an attempt to explain the origin of differences in social capital. A structural hole can be understood as a gap between two individuals who have complementary sources of information.

Burt’s theory, outlined in his paper: “Structural Holes and Good Ideas” (2004), suggests that individuals hold certain positional advantages/disadvantages from how they are embedded within a social network.

Most social structures tend to be characterised by dense clusters of strong connections, also known as network closure. The theory relies on a fundamental idea that the homogeneity of information, new ideas, and behaviour is generally higher within any group of people as compared to that in between two groups of people.

An individual who acts as a mediator between two or more groups of closely connected people could gain an important comparative advantage. These individuals act as “bridges” over structural holes.

Bridges enable the transfer or gatekeeping of valuable information from one group to another. In addition, the individual can combine all the ideas he or she receives from different sources and come up with the most innovative idea among all.

At the same time, a bridge occupies a precarious position, as ties with disparate groups can be fragile and time-consuming to maintain.

In Burt’s research the individual who benefitted from structural holes was considered an entrepreneur. Application for this theory can be found in one of Burt’s studies of 673 managers at a large multinational.

By taking this theory, and changing the nodes from individuals to organisations, it can be used to understand how certain organisations act as bridges between traditionally closed groups.

Health is being reimagined as a result of scientific advance, technological change, and rising customer expectations.

The disciplines of healthcare and technology are merging to create life sciences 4.0: A customer-focused, collaborative, data-driven approach to product and service development in which life science companies interact within a network that includes traditional health incumbents and new entrants.

The ubiquity of mobile and peer-to-peer sharing tools has transformed consumers into super-consumers who are now demanding more of the same from their interactions with the health ecosystem. These demands include experiences with products and services customised to individuals’ genomes, microbiomes and meta-biomes.

Increasingly, consumers will require the integration of these point solutions into more holistic, data-driven platforms of care. Sensing an opportunity, digital health and technology entrants are already moving to meet consumers needs.

To gain positional power, life sciences companies must invest strategically in the capabilities that create future value. Future value will be driven by improving individuals’ health outcomes by unlocking the power of data that has so far resided outside the traditional health ecosystem.

Life sciences organisations are in effect looking to bridge structural holes created by ecosystem evolution. The following analysis is an attempt to snapshot who has started building these bridges:

A platform is a mechanism to connect different stakeholders in order to combine and share data easily and securely to deliver a shared goal: improved health outcomes.

Platforms are the embodiment of the connectors that fill the structural holes. We have seen many platforms bridge such divides over the past two decades, UBER, Facebook, Lyft, Amazon & AirBnB are all well-known examples.

We are now seeing the emergence of such platforms for health such as PatientsLikeMe, connecting highly disparate contributors: consumers, physicians, payers, tech players and product makers.

Successful platforms will combine these diverse data streams to create exponential value. However, this will only be possible if this data which is currently stored in incompatible systems can be aggregated and structured in ways that allow them to be shared in real time.

Interestingly platforms in other industries have significantly benefited from “first-mover” advantage by creating positive network effects that can result in market dominance.

This is going to be a hotly contested area that will integrate markets and create significant outcomes for healthcare users. The Anmut view is that platforms form a key step to the patient-centric model and they are already developing.

The players that have an understanding of their data and are able to manage and augment it will be in an advantaged position to serve the new market and create value.

At Anmut, we help organisations understand the value of data and its strategic significance. If you are interested in learning more about what we do, get in touch with us today via info@anmut.co.uk.

Upon submitting the form above, you will be sent an email giving you the option to opt-in and become a subscriber. When you opt-in, we will occasionally send you content updates via the email address you provided. You may unsubscribe from these communications at any time. For information on how to unsubscribe, as well as our privacy practices and commitment to protecting your privacy, please review our Privacy Policy.

Fill in the form below and we’ll get in touch.